Lauri sent me these polishes to swatch for her and so I thought I would do a review of them for you guys as well.
Sorry if some of these color combos don't strike you as particularly "Halloween-y". I'm at school right now and only bring a few polishes with me at a time.

I've got seven polishes to show you today so it's going to be a pretty long post. Enjoy!

Hell Hath No Fury over Barry M Coral
Red, orange, and iridescent glitters in a clear base. This also has some really nice golden shimmer to it. 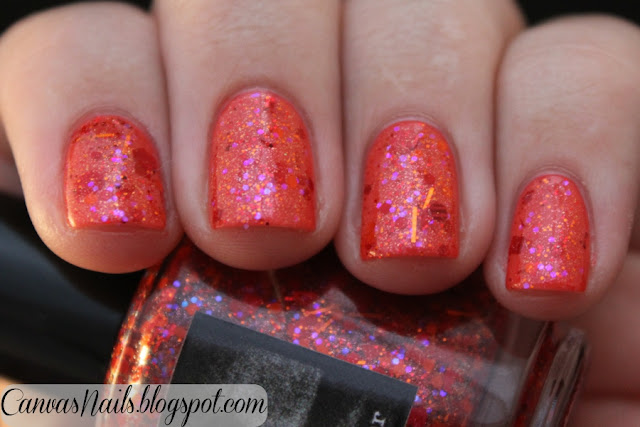 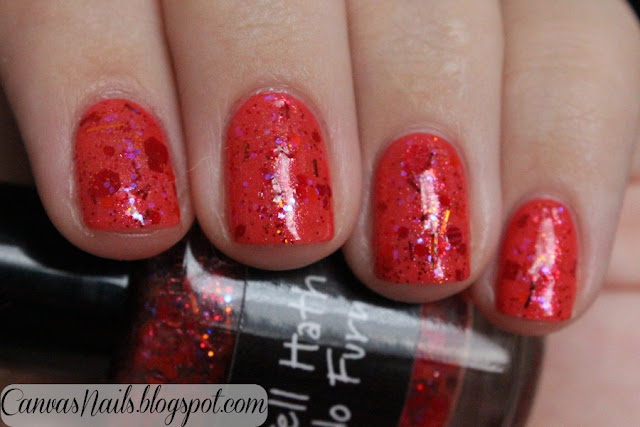 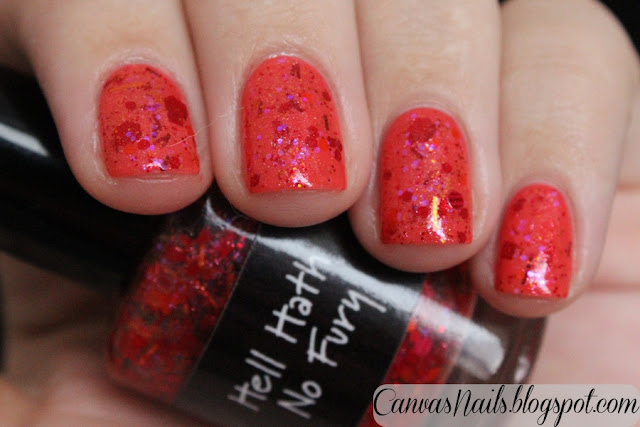 Purple People Eater over Essie Boxer Shorts
Gorgeous! One of my favorites from the collection! Small purple, blue, and green glitters in a clear base. 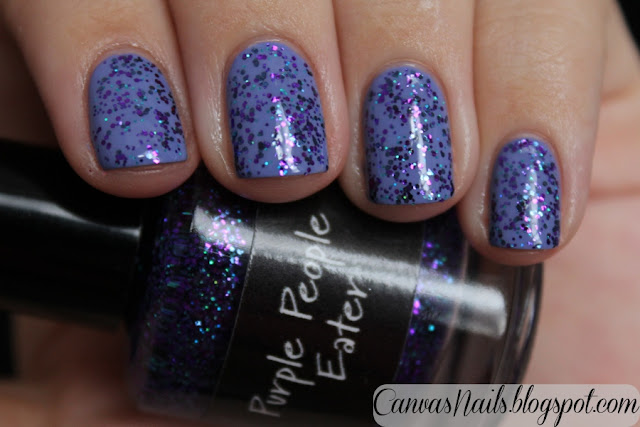 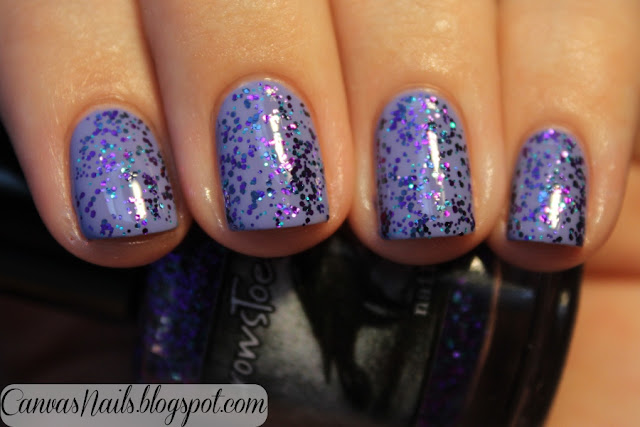 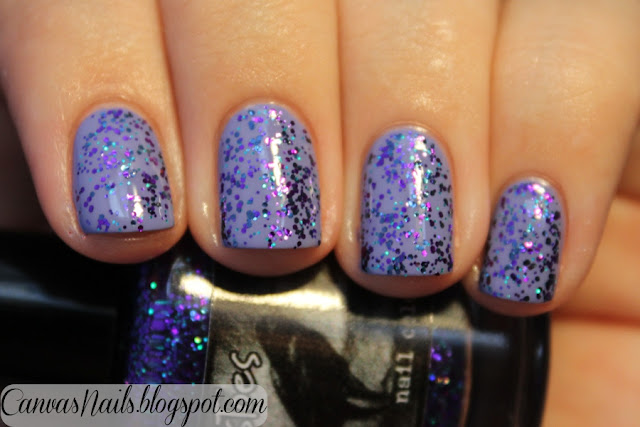 Bone Daddy over Zoya Dove
A mix of white and iridescent glitters in a milky, grey base. This is the only polish in the collection that has a tinted base. Application was a bit difficult with this one because there are a lot of the large, white hexes. You need a bit of skill in applying polish to get an even look with this one but I think it's worth it in the end. 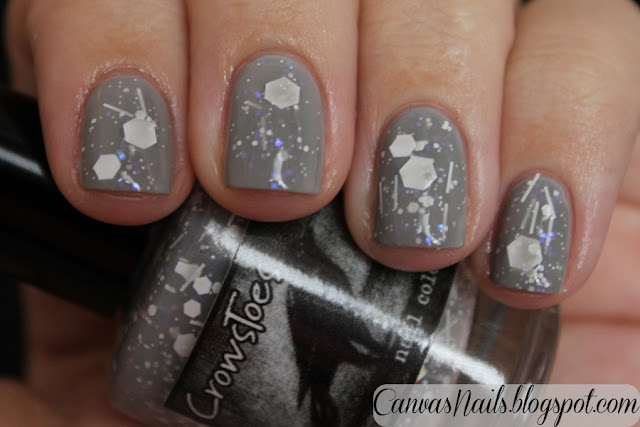 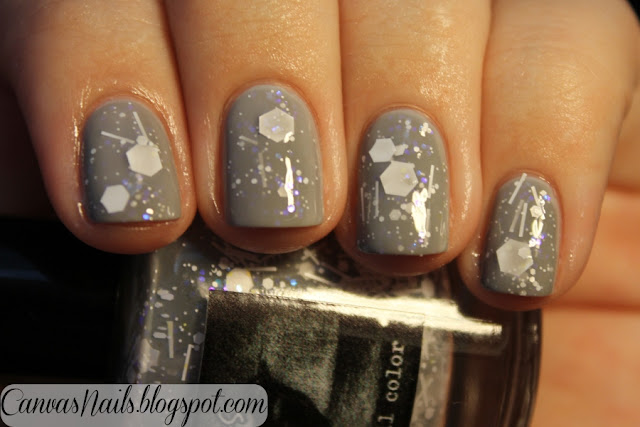 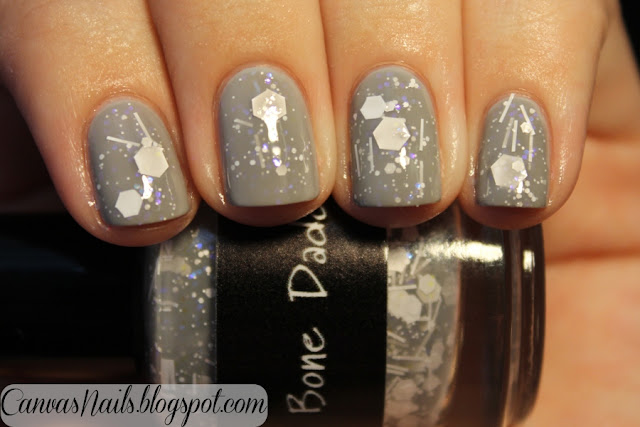 Tangled Web over China Glaze Electric Beat
A mix of black and duochrome (blue to green) glitters in a clear base. This one is really fun! I love black glitters!
I had a hard time capturing the color shift of the glitters in my picture but in real life they're much more obvious. When I was first looking at the bottle I thought it included blue and green glitters but then I realized that they were actually duochrome! 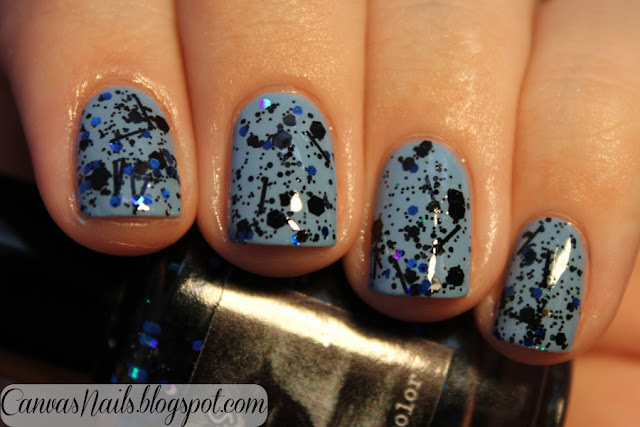 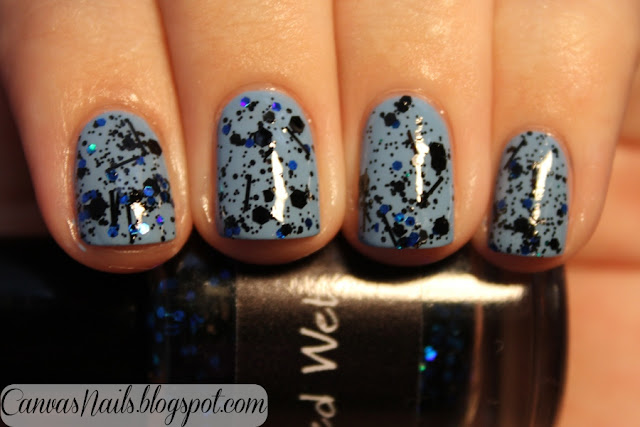 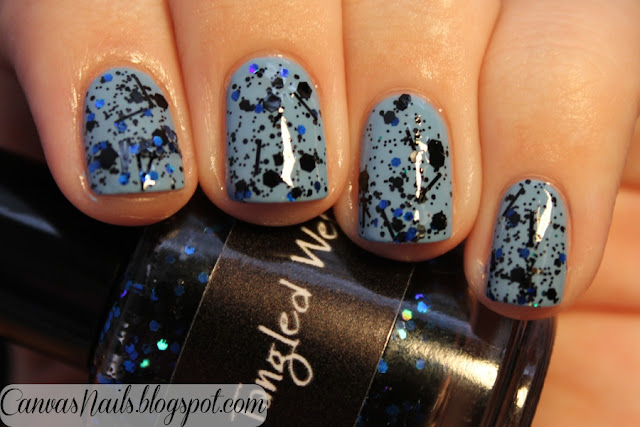 Last Call at the Crowbar over China Glaze Elephant Walk
Multicolored glitters in a clear base. The primary color is a gunmetal, silver glitter. It reminds me of a dark version of all the Happy Birthday dupes. The darker colors make it even more appropriate for fall. 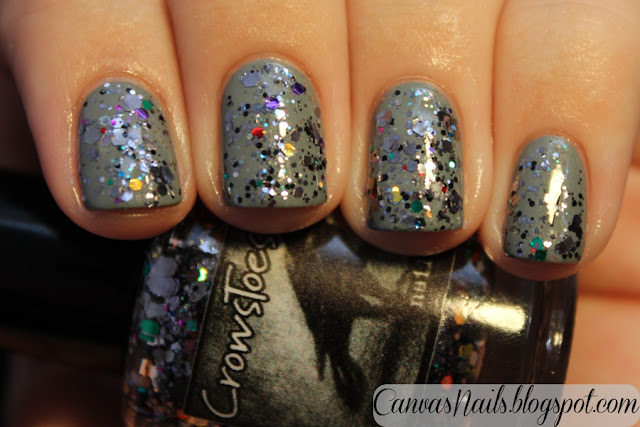 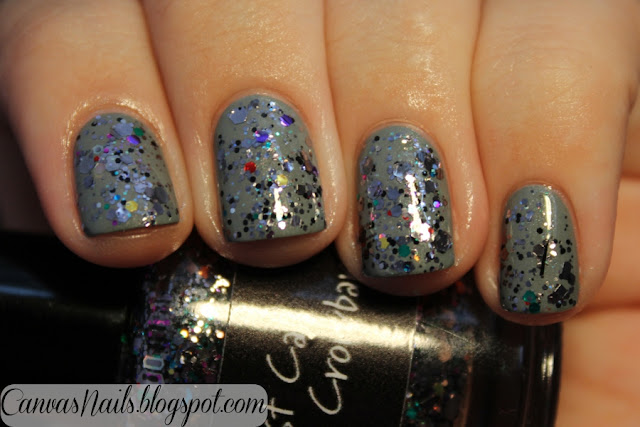 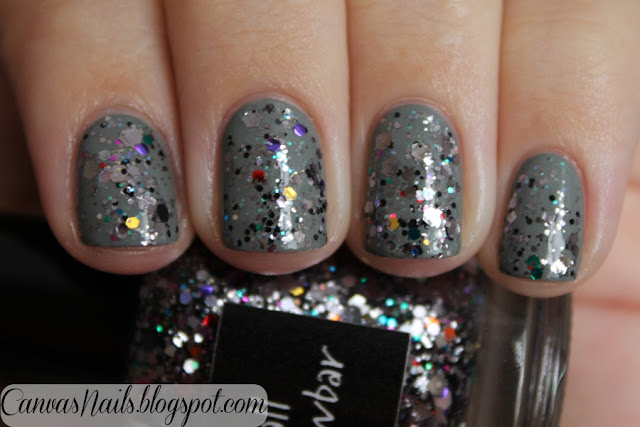 Voodoo over Sally Hansen Crushed
I know what you're thinking. Why am I showing you Voodoo again? It's because Lauri informed me that the version I showed you a few days ago was an earlier version and the one that was going to be for sale was slightly different. There are purple, shredded glitters in the updated version.
Purple, orange, and green glitters in a clear base. Since I already showed you what it looked like over a purple, I wanted to show a different combo today. 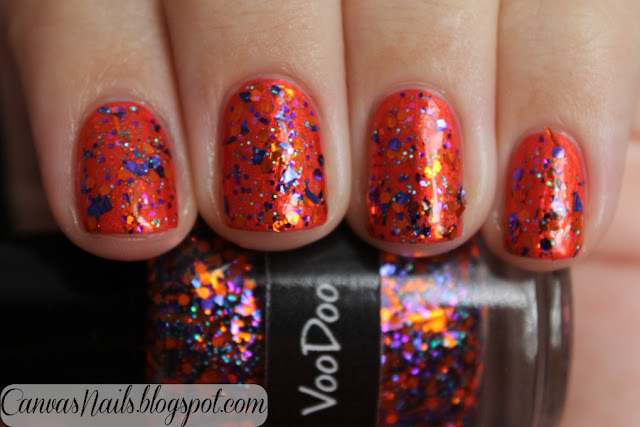 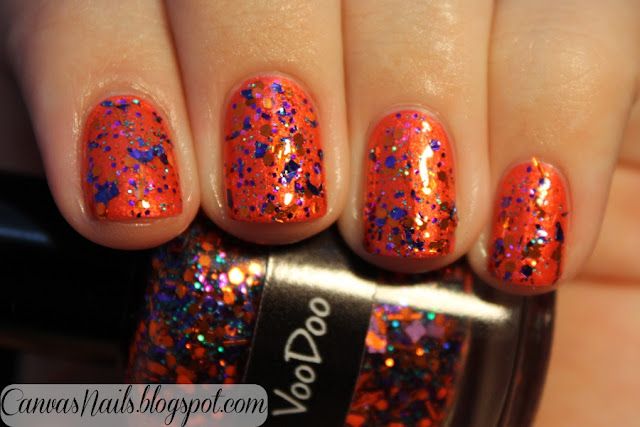 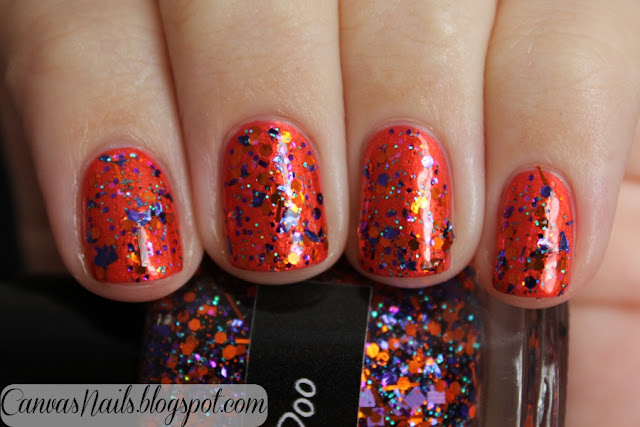 Frog's Breath over Sally Hansen Lickety-Split Lime
A mix of green and gold glitters in a clear base. This one was a surprise favorite. I'm not normally a green person (unless it's mint green, then I'm all over it) but Frog's Breath is really phenomenal! 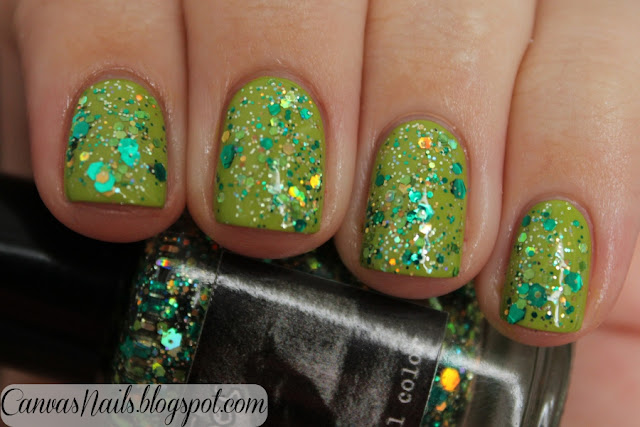 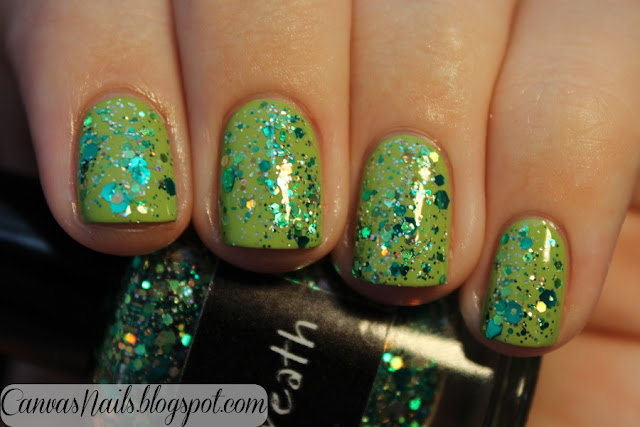 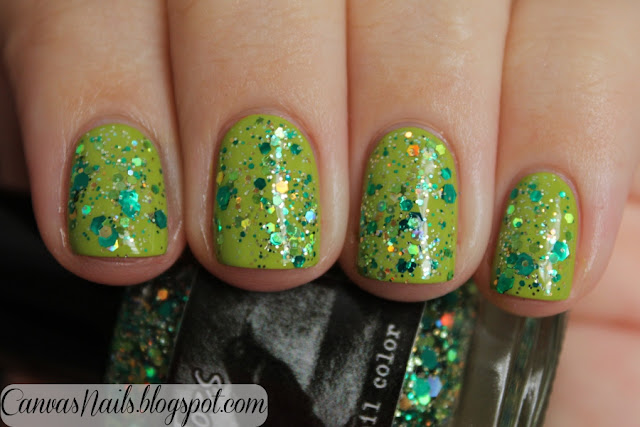 My overall impressions of this collection is that they're all really great! Application was very easy on all of them besides Bone Daddy, which was a bit trickier. I've done one coat of glitter over their base color in all of these pictures.
What's nice about these polishes is that they all have a Halloween vibe to them but they don't scream Halloween so they'll still look nice all year long. I find that glitters generally dry very fast and these were no exception.

It's really hard to pick a favorite but I think the most stand-out polishes from this collection are: Voodoo, Purple People Eater, and Frog's Breath.


Polishes can be purchased from Llarowe and Overall Beauty.
For more information on Crowstoes polishes (including swatches of the rest of her Halloween polishes), check out Lauri's blog The Polished Crow.
For updates on stock regarding Crowstoes polishes, make sure to follow Llarowe's Facebook page.